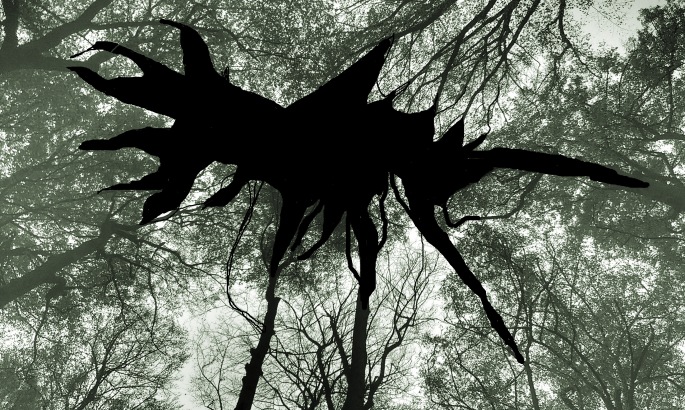 There are many ways of looking at the problems western societies face today. All have their uses: larger than life problems call for numerous and varied angles of analysis. Seeing a spiritual dimension to the issues at hand is one way of seeing the world. Yet this angle is often overlooked, ignored, or even ridiculed in a general discourse. We leave it to monotheists to interpret the world in terms of a spiritual battle between benign and evil forces. They are welcome to this monopoly, it seems. Pagans and the like often shy away from the monochrome dualism of good and evil. In our world, it comes in shades and hues. But while acknowledging nuance is a good thing, closing our eyes to clear and present evil is not.

The birth of a bully

During my lifetime, an ill wind stirred once more in the west and now blows freely, like a chilly draught we only truly start noticing while we are already shivering. From where does it hail? ­The spirit who insidiously tears down the fabric in societies formerly striving for equality and opportunity was not born yesterday. Maybe it arose from the first larger villages, where specialised trades started to develop.

Just like children are not born bad, this spirit was not either. It was born from the buzz of free people, working and competing with each other, bringing out the best in themselves. You could even call it a noble and a just spirit, for as it grew, it rewarded the ones who put in the extra time and effort into perfecting their craft. Enveloped in a strong sense of community, it could do little harm.

Yet as soon as coin came into existence, the spirit clung to it. It started to travel the world and broadened its horizon. The spirit grew strong and tall in the cities and was no longer satisfied with impartially hovering in the marketplaces. It fed itself on greed and selfishness. This bloated youngster drew quite a following to itself. Many who understood its mechanisms worked with the spirit to get what they wanted. Their opulence came at a high price, but others were forced to pay it with their dignity and humanity. Through these priests and priestesses, it came of age during the time of the industrial revolution, until people united against it. Laws bound it and tied it down. It was never banished though. It just bid its time. ­

Western European countries have a modest tradition of strong, public institutions. It is easy to forget how young this tradition actually is. 200 years ago these institutions did not exist and many public services only came into being after the Second World War. It seems that lack of awareness of how things used to be has made us careless. Our forgetfulness has left us prone to the same old spirit again. And it is smarter this time around. It has been forced to clean up its act, like a white collar criminal. It has done its homework. The spirit has smelled greener pasture. There, it can feast upon a domain in which it has no business at all. It feeds on public healthcare, utility companies, education, railway services, indeed on all former collective institutions that everyone needs at some point in their lives. Its priests and priestesses are not factory owners with top hats. They are politicians and administrators; many of them even mean well. Demographic and economic trends call for new, sustainable public services. But they fail to recognise that the spirit is not the one who will help to solve their problems. It only drains the public domain and favours a select class of people, while the collective is impoverished. The spirit lures them in with promises of efficiency and effectiveness. It spins the story like cotton candy and its priests sugar-coat the mechanisms by which the spirit aims to rule, saying that we will all profit from it. The numbers add up, don’t they? They do at first. And they certainly do for the high priests and high priestesses, who have created a caste of minion-managers, marching like blinkered donkeys with a carrot dangling in front of them.

It is dangerous to meddle with the spirit of the free market. Even the ones that have served it loyally throughout their life, might find themselves sidelined in old age, when help is no longer available and pensions have evaporated. The emphasis on work and profit has dismantled communities. The lucky ones, with either money or family to take care of them, make good their escape. All for one and none for all.

There are many sociological and political explanations for the state of our society. It has to do with the weakening of communities, growing individualism and globalisation. That is all true. Yet none of these reasons can, by themselves, explain the blind faith our governments have put in the mechanisms of the free market. This ruthless automaton, which goes about its business-as-usual, takes no heed of what it destroys on its path. We should recognise it for what it is, something that was long ago wholesome in itself, but spoiled and rotten now, like a bad egg. Pagans and indeed all people who consider themselves spiritual beings should be aware of this powerful ethereal dimension. The acknowledgement of its presence will help us to fight it accordingly.

So question its precedence over all other values. Strip and flail it, expose this spirit for what it is. Interrogate its priests and priestesses, for the havoc their blind trust in the spirit’s mechanism has caused in our societies. Fight it with words, images, and actions that are inherently valuable. Truth.  Beauty.  Art.  Quality of Life. Nature. Compassion. Escape its narrow confines and its desire to capture the world in numbers and graphs. Put it back in its place, where it belongs, as an impartial mechanism in the free exchange of goods and services, in a strong community of people unburdened.

4 thoughts on “The Spirit of the Free Market”