Some new device will come out, something which, for hours on end, will dull the bodily rage we feel after a third-of-day’s labor.  We’ll come home tired, driving across hot asphalt past ghosts of forests, over corpse of bison, elk, and ‘Indian,’ after hours of coding, or answering phones.  Level-voiced women and men will soothe us with promises of a bright weekend, great beach weather, they’ll advise, between cloying advertisements for Christmas sales and New Year’s parties.

Interspersed, the assurances–the President said this, Congress will do that. Arguments between themselves, left-hand right-hand both stroking the slicked-up phallus before glowing altars with new operating systems and lifted faces.

We’ll grumble to each other–she’s not doing what she promised, he’s violating the Constitution, never once daring to plumb the depths of mythic paper and civic religion because it’s Friday.

Prices rise for salad greens we don’t eat anyway, for apartments in neighborhoods we wouldn’t bother to live in.  Gas goes down and we have a little extra money, gas goes up and maybe we’ll take a bus.

Sorting bits of paper into green bins and bottles into blue, we’ll smile, having done enough.

New iPhone, though, and 2 more miles per gallon, and anyway the kids gotta go to practice, the mortgage’s gotta be paid.

Maybe we’ll find another vein.  The floods, the droughts, the landslides, the blizzards, the weather is always something, isn’t it?  New lightbulb to poison the ocean, don’t eat that fish if you’re pregnant, retirement might not be there.

We’ll cling. We’ll claw, grasp, choke and grab and clutch and cling to things supposed to be.  This is America, you know, this could be better but we’ll get there and how come they want to kill us?

Spirits scream from dying forests, but they’ll build some low-income housing to make up for it.  Rivers dead, but desalination plants will make it better.  Can’t get in that vein anymore, but there are others.  Between the toes so no one knows, like the time we didn’t sort paper from plastic in that bin.  Heated and injected into the thigh, if you really need the eye–you can always make due.

We’ll argue. Divine from the cards, from the stars, from the history book and the talk-shows, pundits and putrefaction but anyway, I’ve gotta go to work and how many jobs will that really make anyway?

Water shut-off in cities full of Black folk so we don’t care.  Water wars in Ireland but that’s so far away, water pumped from before the days of walking apes but we gotta grow our food, can’t just go without.

Choked streams, dead gods, mountains tumbled-down ’cause we can’t live like the poor.  Solar will save us, we’ll shout, desert priests staring into the sun.  Split some atoms, it’s worth some tumors, and here’s another famine but they’re darker than us again.

Coders still flushed with money arguing about public transit from their plastic condos, staring at screens like the grease-covered fingers of the immigrant behind the counter.  They’ll never be the same, they merit more because they use their brain and we’re all thumbing the same phones.

Barista and cook drunk-to-sleep, driver and builder slumped in soft chairs, kicking empty cans they’re too tired to recycle and anyway we know it’s too late.

Spirits screaming as they leave, gods silent as they withdraw, crops wilting in the fields, but man, maybe–there’s another vein.

Flickering fantasies of zombies because we can’t see the living-dead we churn out, the starving on our streets and raging behind the fences.  Mindless things, no sense, no hope, no reason could possibly birth such terror.

Slurp a coffee picked by their hands, throw on a shirt sewn by their fingers, scroll for a pick-up on phones they’ll never afford though they make them for you.  Cheer on the soldiers returning from their slaughter, grumble ’bout the taxes ensuring their submission, change the channel when you can’t watch their anger.

There’s gotta be another vein, asses wiped on flesh of forest, muscles toned in gyms like factories, doggy day-cares and organic juices and anyway you can’t always care.  Center, ground, breathe out that anxiousness, unsettled scores and open yourself to Spirit on your way to the Co-op and eat a little less.  Ethical flesh now and maybe more Kale, corpse-cock and face-lifts The Science will find a way.

Postpone death, put it off, prop them up. Put on a new cock, pull up the sags, smooth the skin and replace the bone. De-salt the sea, un-tar the sands. Here’s a hybrid, half-petrol half-coal; here’s a chimera, part-algae part-corn. Dam up the dying rivers, shore up the flooding seas.  Move money there, borrow credit there, shine LED’s against the shadow of death’s looming debt.  Find another well for water, another vein of coal. 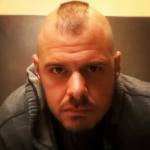 Rhyd often lives in a city by the Salish Sea in occupied Duwamish territory. He’s a bard, theorist, anarchist, and writer, the editor of A Beautiful Resistance–Everything We Already Are and co-founder of Gods&Radicals, author of Your Face Is a Forest and a columnist for The Wild Hunt. He growls when he’s thinking, laughs when he’s happy, cries when he’s sad, and does all those things when he’s in love.
He worships Welsh gods, drinks a lot of tea, and dreams of forests, revolution, and men. His words can be found at Paganarch.com and can be supported on Patreon.com/Paganarch

We’ll be announcing the line up and cover art for the next issue of A Beautiful Resistance soon!  In the meantime, there’s still time to underwrite, subscribe, or pre-purchase the next issue!

9 thoughts on “Maybe, Another Vein”