“A frightful hobgoblin stalks throughout Europe. We are haunted by a ghost. The ghost of Communism…”

From Helen McFarlane’s English translation of “The Communist Manifesto”

It’s been 80 weeks since Gods&Radicals officially started. Since then, we’ve posted 381 articles by over 60 writers, published two issues of our journal A Beautiful Resistance and one other publication, A Pagan Anti-Capitalist Primer.  And we’re just getting started.

The call for submissions for the next issue of A Beautiful Resistance will be September 1st, 2016, and we currently have a publication date scheduled for Imbolc of 2017. Due to the unanticipated popularity of the journal, we’re adding staff, retailers, and working to overhaul our distribution process to get copies to subscribers faster.

We also have another print project that will come out before then–more information on that soon!

While Rhyd Wildermuth, the Managing Editor (hi!) was on pilgrimage in Europe, three Gods&Radicals writers kept the site afloat. Rhyd would like to thank Linda Boeckhout, Fjothr Lokakvan, and James Lindenschmidt for their incredible work. You folks are awesome!

On September 9, a series of coordinated work stoppages and hunger strikes will take place at prisons across the country. Organized by a coalition of prisoner rights, labor, and racial justice groups, the strikes will include prisoners from at least 20 states—making this the largest effort to organize incarcerated people in US history.

And also in the United States, Sioux and other First Nations groups are fighting to keep an oil pipeline being built across their lands:

Tribes from North Dakota and South Dakota are adamantly opposed to oil companies coming near tribal lands in fear of pipelines bursting and then contaminated water supplies, tribal lands and especially sacred sites on tribal lands.

Feminist and Marxist writer Silvia Federici was featured in an interview in one of our favorite new magazines, ROAR:

The reason women have been targeted by these institutions is that, in the face of the crisis, they have taken matters into their own hands. They have gone into the streets and have created a whole alternative economy that has its roots in subsistence farming—it is the micro-trade, the small snacks and drinks that they prepare and sell for very little money to neighbors and other workers. This is an economy that international organizations and governments try to destroy or manipulate, through the aggressive promotion of micro-credit for instance, because it gives women and people in general more independence from the market.

Silvia is also the author of Caliban & The Witch, as well as an essay in A Beautiful Resistance: Everything We Already Are.

Last weekend saw the second year of Many Gods West, a polytheist conference co-founded by Rhyd Wildermuth and co-organized this year by Gods&Radicals board member Syren Nagakyrie. She wrote about her experience (and presentation) here.

Like eating human flesh and worshiping power-hungry gods? Some Greek cultists probably did too.

Have a news tip for us? Please send it our way!

Be well, and Resist Beautifully! 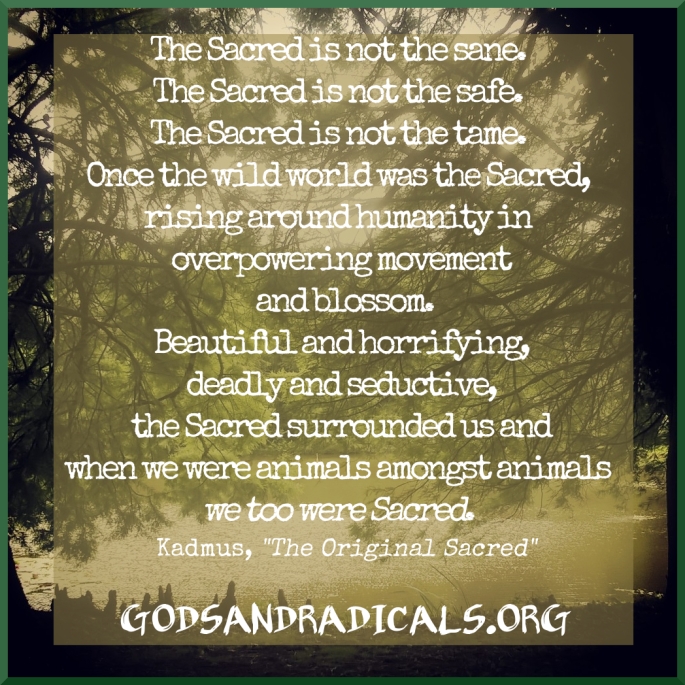