She flies on a single swan’s wing,
engine thrumming in her head,
swan’s heart beating

like the hammer in Arctic ice
driving wingbeats southward
southward

down flight-ways
over the Rakovie Lakes,
the Taiga, the Gulf of Finland,

Belgium, France, across the foaming
Channel to the White Cliffs,
then back to Slimbridge,

the mudflats of the Severn
to dip her beak into
home sands.

They say that shaman fly
in bird form,
transform to seek answers,

stake their souls against the winds
of industrialisation,
brave the guns,

return exhausted
with shattered pieces
of the world-soul.

Nine Bewick’s swans were tagged,
told apart by the patterns
on their beaks:

We are gathering the pixels
of their data,
trying to assemble a picture.

A story is forming in the electric night
like when the first bacteria
birthed life:

She says our destinies are intertwined,
hang upon a swan’s wing.
She flies away

at the end of the rite
to join the swans returning
to the Arctic at the call of spring.

*You can find out more about Sacha’s radical journey as a human swan and The Flight of the Swans project HERE. 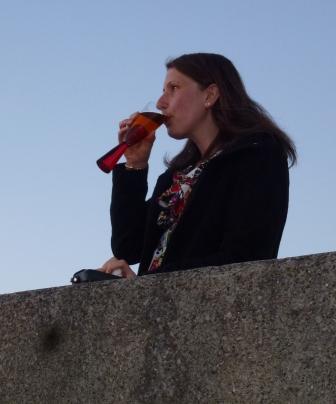 Lorna Smithers is an awenydd, Brythonic polytheist and devotee of Gwyn ap Nudd recovering lost stories of the land and myths of forgotten gods and leaving Signposts in the Mist. She is the author of Enchanting the Shadowlands, editor of A Beautiful Resistance: The Fire is Here and a contributor to Awen ac Awenydd, Dun Brython, and Gods & Radicals.