I often find myself discussing religion, or religious philosophy, or religious metaphor with people. I practice a non-mainstream religion, and even inside Paganism my beliefs are archaic and esoteric. So when I use a term (such as: Jungian Archetypes, Liminal Edge, the Second Battle of Magh Tuireadh) I pause and tip my head questioningly at whomever I’m speaking to: “Do you need that explained?”

Sometimes yes, sometimes no, but it makes the conversation go smoother.

I was thinking about the Goddess Bridget (because of the season, neh?) in my morning meditation period (which could also be described as ‘dozing’) and I realized that I rarely have to explain a reference to Her, even to people that I do have to explain “Lugh” or “An Dagda” references to. Bridget is described in the good books (modern explications of lore and Pagan thought) as “pan-Celtic.” Generally I take issue with the term “Celtic” because some people use it as a religious descriptor (“I follow a Celtic Path”). In my world, the response to that is an automatic: “Which hearth-culture?” This is because, like the tribes of the First Peoples, the Celtic cultures are different. Strictly speaking, “Celtic” refers to a common group of languages that derive from a non-Romance root. The cultures of the peoples and countries that speak those languages are not analogous; one bit of one culture cannot be popped into a similar-but-not-identical slot in another.

But Bridget is actually pan-Celtic in that She appears in almost all of the Celtic cultures in one personification or another. Sometimes more blacksmith-y, sometimes more midwife-y. Sometimes drinking only the milk of a white, red-eared cow (do you know what “red-eared” refers to?), sometimes hanging Her cloak/brat on a sunbeam. 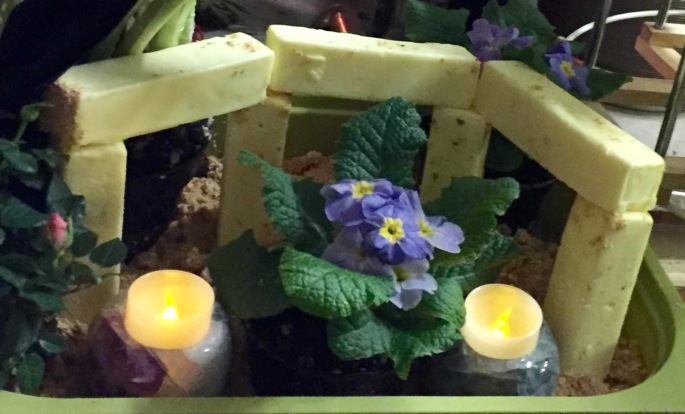 Bridget is more than pan-Celtic—even people who are not referencing Celtic lore in their religions (“I am spiritual, not religious’) recognize Her. “Well,” says Other Meditative Mind, “you are speaking mainly to white, European-derived, middle-class people when you discuss religion. Your reference group is skewed.”

Very true. So I think about, for example, the Chinese. What about Vodoun?

Then I realize the truth behind the meditative mind—

Religion has a Goddess of Kindness.

(Sometimes also a little Firmness or Kick-Your-Assness stirred in.)

Because we need Her to listen to us.

Her hand over the refugee,

The hunters find a honey-tree,

Bridget is there.
Inside the tiny cardboard shack,

The beaten spouse will not come back,

Bridget is there.
Street-child finds a coin in the dirt,

Aid-centre hands out a clean shirt,

Bridget is there.
“Wait, we’re really not that different!”

Bridget is there.
A human being cries out in pain,

Bridget is there.
Somewhere a child goes to school,

The people rise up against misrule,

Bridget is there.
We all have something that we fear, 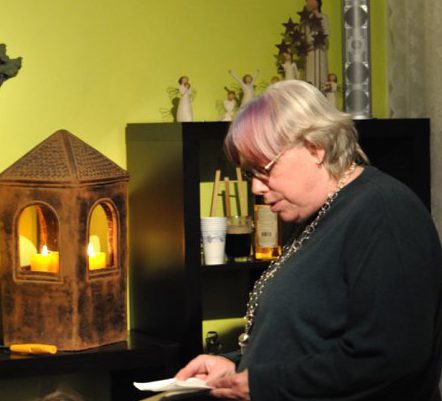