“The machine-world, offering nothing but ash and bitter hate, will in time make a sacrifice of us all.” 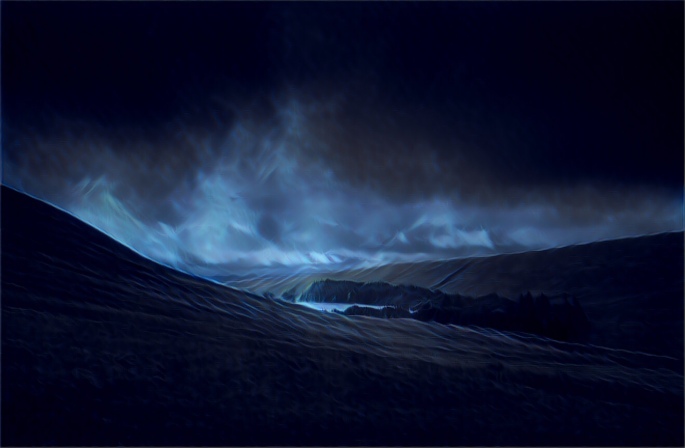 In dappled groves of ancient, hulking oaks standing god-like among endless oceans of emerald moss, a voice rises up from the black, fragrant earth strewn with forgotten ruins and grim stone shapes hidden beneath mountains of ivy. Thin and airy at first. A mere dream of lurking things at the edge of thought. Suffocating darkness that reaches its tendrils deep into the well beneath the trees. A memory, only half-recalled, that wanders like a hungry ghost among the empty, cobwebbed corridors of the ruined mansions and submerged palaces of consciousness.

It floats and drifts like smoke, becoming fuller and stronger as it climbs above the crowned heads of the trees. Now like a chorus of monstrous chthonic angels, the song rings out over the land, bursting with glory and rage. A name that has been cursed for millennia shrieks out like a thousand dire pipes and shatters the foul torpor of a world lulled to dreamless sleep by the lies of the machine. It spits its proud wrath upon the face of heaven itself: Cromm Cruaich! The Crooked One of the Mound!

The corn-headed one rises up upon his bloody pile. His bony shoulders stooped and the horns upon his brow piercing the sky and the sun blazes above him like a halo of fire. Shrouded in mist, he sits enthroned on the Hill of Kings surrounded by his wizened idols. In his dread claws he holds the gifts of milk and grain, and in the timeless deep did Tigernmas one distant Samhain eve march to that hill with his panoplied men of war to give homage to the Bent One. Tigernmas, that beautiful Lord of Death who did such feats of war upon the line of Finn that he nearly rooted out the blood of those kings forever, who did make much slaughter upon the kings of Assyria, who did first give the drinking horn to his vassals to drink, and robe them in imperial purple.

What dark dream moved him to march his host to that place and do their deeds there? For from that long march to the high hill, the flowering youth of Banba in their vigor and virility would never return. For upon that hill Cromm held court long before the Tuath De descended from dark clouds onto the mountains of that land, long before the Dagda stirred his cauldron and shook his wild club. No, from those older and deeper did Cromm trace his lineage. From those who who did battle with the Bright Ones, after they burned their ships. From those who did war upon the very fabric of reality. They who were there when the first came upon the shores, they who were there when the flood came and after, they who rule even now in Mag Mell. The latent-ones, who lurk within every heart and place of darkness, who swim with smiling teeth beneath the troubled waters of the ancient cosmic sea.

To Tigernmas did this Cromm speak and say: give me your sin, your filth, and I will devour it. I will carry it for you and within me it will grow and bear fruit. And from thence I will sit here with my bloody head upon this mound, abhorred and eternally defiled by the excrement that you bring me and I will gleefully swallow. Whatever your crimes and horrors, I will take them and they shall fertilize the harvest and bring forth such splendor and plenty from the earth. I make now with you this covenant.

So with wild eyes and bloody fists the dread King Tigernmas and his men did beat themselves raw and weep and fall to the ground overcome by lamentation and there surrounded by a circle of stones arranged in ranks of four times three did Cromm find their offering to be pleasing and the mighty host was there slaughtered to a man for the gift of milk and grain.

For thousands of generations after the bloody place was held in reverence by the Gaedil-folk, who brought their own sacrifices for the gift of milk and grain. They crowned Cromm in gold and silver. For life on the plains was hard in those times and the secret powers of the god demanded the pouring of bright blood in a circle around the barrow. Even as they emptied the lives of their first born to the god, the people gave thanks in their grief and so the land about the mound became known as the Plains of Adoration. Then came Patrick of Ravenglass, from the home of the Raven Woman, who defied the Ones who Stood in the Grove and spewed impieties from a table in the front of his house. He cursed Kings and Tribes and Nations and came with iron and fire to tear down what had stood since the dawn of ages. So was Golden Cromm sundered and dragged from his holy seat upon the mound. And the earth opened up and swallowed his henges, menhirs, and standing stones, his idols, and the tombs of the heroes laid to rest upon that hallowed hill. And so did the Man of Ard Macha seek to make the place and its gods to be forgotten forever.

Let us turn away from the gods of the sky, in their pride and vanity. They who seek to shatter the wheel, to establish dominion without end by the might of their catastrophic arms. Theirs is a reign that will never be overturned, they declare. By the force they wield the chthonic ones will never again threaten their imperial peace. And like, Patrick who served them, they will eradicate the memories of where we once stood and offered ourselves to the dirt. They will teach us that our forms are made to be bathed in light, that we must shun the dank and the rot, the hollows, and the mounds. That we should not seek the deep places and that we should make enemies of the powers that dwell there.

But we will remember, even in shadows that emerge from the woods at night. Forces that move invisible. Dreams that walk in shimmering moonlight. Stare deep into the dusky grove and do not look away, even when you feel the eyes of the Watcher pierce your heart and lay bare your most secret desires. Do not turn away! The shapes and thoughts that haunt you will tear your soul to shreds with birch branches if you turn from them. And we have turned indeed, to our doom. We have forsaken the powers and they have in turn withdrawn their blessings.

We shall no longer speak of Earth, the Mother. At least not the Mother that gives and gives and gives until her teats are withered and raw from the cruel teeth of her most wretched and ungrateful spawn. No, if we speak of a Mother it shall be a one that is deep and clouded and dark and full of terror. Not without love but a love that is weird and mysterious and to be feared. A love that is not understood but craved. A maddening love that comes upon us in the light of the moon. A love we would do anything to protect.

The mother does not give without claiming what is hers in return. The Earth demands blood. The machine-world, offering nothing but ash and bitter hate, will in time make a sacrifice of us all. It will blot the very sun itself and the universe will fly apart. The old ways are tied to the earth, tied with bonds of blood, terror, and love. In the brutality found upon Cromm Cruaich’s mound there is a mercy that we cannot understand in our world of silicon and cold metal. It lies in understanding that the gods of the earth will take what they are owed, whether it is offered freely or not.

We must submit, not to an external authority but to a truth that haunts us, to a vision that rises up from from the flooded landscape of our dreams. We must dig through the silt of ages to find those remnants, those long buried shapes and structures that moulder, that hold up generations of ivy and moss. Our souls are choked with ruins, littered with archaic forms that drift among layers of sediment, driven along by titanic geological currents. The memories of the ancestors wander among those forgotten paths. Memories that disturb and unsettle us. Aboriginal, they guide us over silent waves to a lonely shore beneath a metal-grey sky. The silence is thick and unmoving. It lulls into the endless sleep of ages and in that sleep, we find ourselves.

Standing among crystalline palaces at the edge of history, we imagine that we are far from a nightmare world of stones and blood. But the one we have exchanged it for is more horrible by far. Though we walk through utopia, asteel fantasy, our souls remain archaic.

Terror lies in the heart of love. 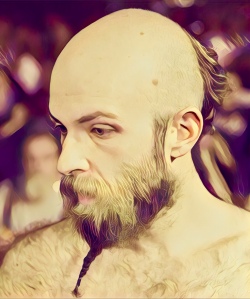 Ramon Elani holds a PhD in literature and philosophy. He is a teacher, a poet, a husband, and a father. He recently retired from being a cage fighter. He wanders in oak groves and speaks to trees. He casts the runes.

2 thoughts on “Upon The Plains of Adoration”