From Danish writer Andrea Hejlskov, on structural sexism in Heathenry

Yet the violence of men towards women is not a subject that we should ignore, diminish or close our eyes to. We should not accept it and we should not excuse it.

I believe heathen spirituality encompasses strong moral concepts such as courage and strength. This means that we most be brave enough, always, to confront the dragon – even if it sits in our midst – and that is what I believe the hasthtag #havamalwitches strives to do.

See, the subject of sexism within heathenry is so much more than a story of physical violence: it is also a story of structural sexism, the kind of sexism that cannot easily be addressed because it is subtle, internalised and banned from our self-understanding. We´re not like that, right? “not in our community, we´re pagans, christ, get a grip!”

Yes: in our community.

I am a “strong” woman and as such I believe many people would maybe have a hard time seeing or understanding that I would have had problems with sexism within heathenry. I am assertive and somewhat successful, I have strong political beliefs and I do have some “power.”

I earned it, I gained it, I fought for it… and I will not excuse this (because I don´t think a man would).

Power struggles, gossip and lack of loyalty is something we all have to deal with; however, I feel that I had to fight a bit harder for both my voice and that loyalty from others. I cannot recount the many times I have been hushed upon on reconstructionists forums. I cannot recount the times people would turn to my blótbrother instead of me asking him to walk them through the ritual.

Worse, the many times we, as women, have had to fight each other because there were so limited space for us… we became competitors.

The structural subject of sexism is a difficult one to handle. Let me make this specific, allow me to root my point in an actual situation, a time, a place, some people sitting around a fire: it was after a very strong blót, the horn was passing around among us, we were drunk, the ocean lay calm and glistening under the full moon, we were laughing.

You know how it is. You know the power of this. The openness in the heart, the sense of community, the sense of being connected to the gods, that the whole world is alive.

My boyfriend at the time was a Gode and I was (am) a Gytha. We did not belong to the same kindred but that night was a mix of people from here and there, then and now; it was an open event and as some swam naked in the calm of the ocean, others would dance around the fire. He and I were dancing around the fire. Meaning; debate and conversation is the root of our religion, this is how the world was created “then went the high and the holy ones to the Rókstolar to hold converse”

As it often happens within heathenry, the dialogue and the debate became heated, wild as the fire, and my boyfriend, when drunk, would change character.

I knew this about him. We would talk about it (when he was not drunk).

Given that there is also a lot of (ritual) drinking in our practise this was becoming an increasing problem in our relationship so that night I asked him to stop- he snapped. I became very afraid of him. I grabbed my cloak and ran for the woods where I hid all night under a bush, afraid that he should find me.

“I´ll kill you” he yelled, into the dark. Later he went to sleep in our tent.

The shame and the humiliation the next day, crawling towards the people after having spend the night as an animal, under the bush, heavy breathing, using my magic to make myself invisible. Scared. To pretend as if nothing had happened. The flickering in peoples eyes as I would then return to my “status”- how my “status”, my worth, my name, my word would slowly be undermined by these episodes. And this: because I am a strong women- people tend to simply not believe me when I share sensitive stuff. Hurt. Pain. Fear.

I don´t hate this man. Not at all. But I hate that I should fear for my life when he was drunk and that I should be in actual danger because he could not contain his emotion, he could not allow it- and I was not a soft harboring woman with my bosom, I would not comfort him, no, I would demand more of him… because such are my inclinations as a heathen woman.

In some ways I think we were both victims of sexism.

The culture within heathenry does not demand from a man like that–that he should reach out, open up, ask for help. I don´t think anybody approached him and said “hey… dude…”

Instead other men would maybe even look up to him for being such an badass.

It was a dysfunctional relationship, no doubt about it but this is not the point of my story, by sharing this I want to highlight some of the hidden shit we deal with, all of us, alone.

Because of the things that happened I came to mistrust my kindred, my friends. I didn´t feel safe. The space of heathenry became contaminated, maybe we contaminated it ourselves- but the taboo of this, the way we would never talk about these incidences (and there were other incidences, other people, other stories)- slowly eroded something within me. I came to mistrust my community. I came to question loyalty- and if you don´t have loyalty, then what do you have?

Sexism came between us.

The stereotype of gender that my boyfriend suffered under – and me as well.

So I disappeared. I went into the wild and lived one the fringes for six years, practising alone.

Well. I am back now. 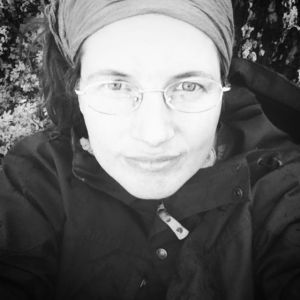 Andrea Hejlskov is a Danish author and journalist living off grid in the wilds woods of Sweden. She has been a gythja for nearly 15 years. This is her page www.andreahejlskov.com

8 thoughts on “The Havamal Witches”