“Because revolutions don’t only spread like wildfire, they spread like forests and especially trees. An old tree puts out many seeds that become saplings that become trees of their own. And then those trees put out more seeds, more saplings, more trees, and next thing you know the world is a forest again.” 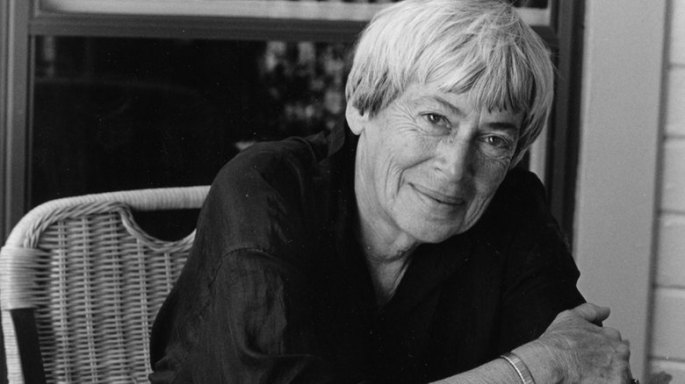 “To die was merely to go on in another direction.”

Ursula K. Le Guin has died. Or returned.  Or really, she’s merely gone off in another direction.

Ursula K. Le Guin was like a grandmother, but also like a tree. Trees can be grandmothers, you know, and they often are. Because trees don’t just grow and die, they do lots of other stuff in their very long lives. They shade the ground, shelter and feed small animals and birds. The leaves they drop compost into more soil, while their twigs and branches get gathered for nests. And their roots, oh those roots. They hold the earth together around them, even long after the tree itself has died.

Le Guin was like a tree. When I first saw her at a reading in the crammed back room of a bookstore, I didn’t just see a woman there, nor did my companions.

“She’s like an ancient tree” one of my friends whispered. “It’s like a tree lived for a thousand years and decided to walk around and write and tell us stuff.”

My friend was right. And also wrong, because she was a human. But actually what’s the difference? Because trees and humans aren’t so different, and the truth of the matter is not for science and logic to decide but for art.

“I talk about the gods, I am an atheist. But I am an artist too, and therefore a liar. Distrust everything I say. I am telling the truth. The only truth I can understand or express is, logically defined, a lie.”

Many of the tributes to her will be about how she inspired the fiction of many others (ahem–wizard school, a matter she herself shrugged off and laughed about, because ideas didn’t belong to people anymore than trees belonged to their grandmothers who themselves were grandchildren).

But what shouldn’t be under-stated is how much she inspired those of us who learned fiction could tell the truth, and truth could be completely fiction, and the difference didn’t matter nearly as much as people like to think.

For a long time as a writer she fought the demands of literary critics and the publishing industry to define her books according to a marketing category. Science Fiction. Fantasy. Why were both different from fiction in general? They were all beautiful lies telling the truth; some had imaginary dragons, some had imaginary people, but it was all imaginary.

And of course if it was all imaginary, yet we also found truth in it, then what does imaginary actually mean? And who decides?

Well–we decide. That was always her point anyway, wasn’t it? That was her point about capitalism as well (because she was as anti-capitalist as they get, though you might not always notice from the big-name tributes). And about anarchism (yeah, she was one of those too). And really her point about love, and gender, and everything.

We decide. We make the world. But sometimes people get in the way, particularly greedy people who profit off others’ suffering. And so we have to stop them, but without imagining that stopping them will make every problem go away:

There would not be slums like this, if the Revolution prevailed. But there would be misery. There would always be misery, waste, cruelty. She had never pretended to be changing the human condition, to be Mama taking tragedy away from the children so they won’t hurt themselves. Anything but. So long as people were free to choose, if they chose to drink flybane and live in sewers, it was their business. Just so long as it wasn’t the business of Business, the source of profit and the means of power for other people.

Le Guin never coddled us as she led us through the worlds she created, never tried to make the paths through forests clean of debris. The truth was beautiful and messy, beautiful because it was messy, messy because it was beautiful. The Dispossessed, more than any other work, made sure we knew just what liberation looks like, as did her short story about the founder of the world that book speaks of:

“What is an anarchist? One who, choosing, accepts the responsibility of choice.”

Most of the best quotes are from that short story, most of these quotes are, too. And here’s where I start to cry while I type. Because sometimes a thought would come into my head: there will be a day without Ursula K. Le Guin. It’s a funny thought to have, one I’d have quite often. And it turns out I am not the only one, either–so many of my friends have said the same thing.

It’s because of that story. But also because grandmother trees will not always be around, even if the forest that rose up around them continues to grow. I’m part of that forest, and so are you. So is this site and publisher, so are quite a few others.

And it’s that story (gods I’m crying) that maybe made us think about how one day she would go in another direction. But also we would still be around, and that would mean something and so would her passing.

That story, The Day Before The Revolution, tells the last day of the woman who changed a world. And of course Le Guin changed a world already, but maybe is about to change it even more. How she already changed it will take thousands of tributes (and again, read them all). How she is maybe about to change the world even more, well–I think we will see very soon.

She was and wasn’t a grandmother tree. She wasn’t Odo, the mother of the revolution, but maybe she also was. Because revolutions don’t only spread like wildfire, they spread like forests and especially trees. An old tree puts out many seeds that become saplings that become trees of their own. And then those trees put out more seeds, more saplings, more trees, and next thing you know the world is a forest again.

“Tomorrow? Oh, I won’t be here tomorrow,” she said brusquely. Whoever had asked her smiled, another one laughed, though Amai glanced round at her with a puzzled look. They went on talking and shouting. The Revolution. What on earth had made her say that? What a thing to say on the eve of the Revolution, even if it was true.”

If you’ve never read Ursula K. Le Guin, here’s a short list of recommendations on where to start.

Changing Planes: a really accessible collection of short stories about other worlds all threaded together. Some of them will make you cry.

The Wizard of Earthsea: the first of her Earthsea books, a gorgeous story that doubles as an ethics manual for magic.

The Birthday of the World: Another collection of short stories. Again, some will make you cry.

The Ones Who Walk Away From Omelas, The Day Before The Revolution, and The Dispossessed: these three pieces (the first two are short stories, the last is a novel) outline maybe the best theory of anarchism ever written.

Gifts/Voices/Powers (“Annals of the Western Shore”): three ‘young adult’ novels that I really wish had been around when I was a teenager.

The Left Hand of Darkness: one of the many novels that takes place in her “Hainish Cycle.” Explores what would happen if sex was only something you did, never something you were.

9 thoughts on “Grandmother of the Revolution”