“If there was ever a thing of beauty among our race, it was the part that held the light of the star and the crash of the waves upon a rocky, inhospitable shore.”

“There is a desert on the moon where the dreamer sinks so deeply into the ground that she reaches hell.”— C.G. Jung

I stand upon a hill and gaze to the north, where the sky is filled with flames. The whispering trees sway gently. Urging me to wander, filling my heart with the bittersweet madness of wandering. But I have walked so long already. I have wandered and now have finished with wandering. All will happen as it has happened a thousand times. This is the curse of wandering. Again and again, the wanderer finds himself standing before monuments he cannot remember. Only that he stood he before and he will stand here again. Onward and onward he will be driven, pursued by maddening storms. The self runs but its path is only to circle the endless stones. Life and the cosmos will always be elsewhere. The beast will always be full of bitterness and hunger, as it runs across the plains. Because what it hunts is its own self.

*Who liveth alone longeth for mercy,

Maker’s mercy. Though he must traverse

Tracts of sea, sick at heart,

The ways of exile—Weird is set fast.

But I bind myself to this hill. Here I will stand until ruination. I will not find my home and my mother through movement. I will find her by digging my grave and standing within it. My mother, the moon, gazes down upon me. I can sense her light from beneath, as well. A pillar of light, extending into infinity. Where shall I seek the barrows? Where are the ancient kings buried, with all their war-gear? Where does the radiant blade shine beneath the dark earth? I know, I know.

Thus spoke such a ‘grasshopper’, old griefs in his mind,

What is there to search for that you will not find within yourself? We have buried much of ourselves with them, the dead kings. We have put aside their cruelty, their bloody masks. And yet we have torn from our hearts the beating drum of life and the cosmos. What is left of humanity? What force ever animated these sickly limbs with a sublimity to match the soaring falcon above the dusky hill? The falcon soars that he might rend the flesh and bathe himself in blood. We know, we know. 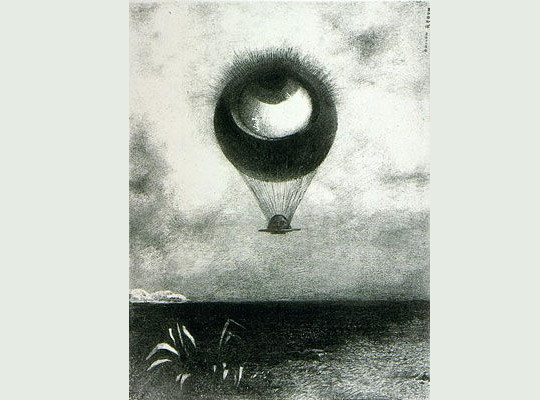 No weary mind may stand against Weird

Nor may a wrecked will work new hope;

Wherefore, most often, those eager for fame

Bind the dark mood fast in their breasts.

If there was ever a thing of beauty among our race, it was the part that held the light of the star and the crash of the waves upon a rocky, inhospitable shore. Where has it been driven? Driven beneath the barrow, denied with the blood. For, do not mistake, the blood and the light are of the same substance. We can extinguish the one only by hiding them both in the darkest places of soul. One hand holds the fire, and the other holds a blade dripping with gore. And yet, whose blood? Our own, of course. But we are done with fathers and the things of the father. The prohibition against blood-letting is the domain of the father, as are all prohibitions and the logic of law.

There stands in the stead of staunch thanes

A towering wall wrought with worm-shapes;

—That thirsty weapon. Their Weird is glorious.

Dig, then. Dig into the black and musty earth. Dig out the sparkling blade from a realm of worms and rot. The sword carried aloft, the moon shining at its apex, for I am of the moon. Never forget: “Who would be born must first destroy a world.” The sword shines in the heart of the jewel. And the one who wields it is the maker and annihilator of worlds. Hesse once wrote, “I am a star in the firmament.” The star knows not morality or mercy. Seek not, nor ask for mercy. Mercy is not a quality given from one divine thing to another, but from a master to a slave. Blazing in the void of space, the glory of the star is combustion and the gentle light that it shines upon the faces of the dreamers, who gaze up at the night sky. Gentleness we may find, perhaps forgiveness as well. But never mercy. To struggle into becoming is the fate of the world.

A wise man may grasp how ghastly it shall be

When all this world’s wealth standeth waste,

Even as now, in many places, over the earth

The wine-halls crumble; their wielders lie

Bereft of bliss, the band all fallen

Proud by the wall.

We have come unto our kingdom and found it ashen and decayed. A lie was written somewhere. We followed a path that circled the tower but never approached the steps. So we flee to distant places. The soul is thrown beyond. The horn is heard among the standing stones upon the hill, where the wolf moans to the wind and the bear digs among the moss and roots and the hawk shrieks for slaughter. The song echoes among the bogs and watery places, where dark things slither and dim lights shine beneath the murky water. Reason has made a waste of the world and buried the flaming heart and the weeping sword. Wraiths wandering among the fallen stones speak to us of times gone by. The White Bull and the crescent blade that slit his divine throat. Even as now, even as now. Like Hesse, we are doomed to endlessly traverse the “hell of inner being.”

Where is that horse now? Where are those men? Where is the hoard-sharer?

Alas, proud prince! How that time has passed,

Dark under night’s helm, as though it never had been!

There is no pain we cannot endure, for indeed, we carry with us the sorrows of the eternal courses of the world within us. Within the heart, all has come and gone and come again. There is no death we have not suffered. The cup is filled and drained and will be filled again. Yet here we stand, alive in a morning world, though our souls dwell in the evening. We have been raised by the Sun, in a Sun land, but we long for our mother the Moon and the icy mists of the forest in twilight. The noumenon rises like a mountain into the sky within the soul. It is not outside of us. Its fragment pulses in the moments that we truly live, like a germ of ice that brings with it the promise of a demon called the glacier that grinds down the ages of the world.

Storms break on the stone hillside,

The ground bound by driving sleet,

The rough hail to harry mankind.

The dead live within us. They slumber in the hidden places of the psyche. In this ancestor-less time we have sealed their tombs. And we evoke their names in a manner both crass and profane to strike out against anything as long as it is not within ourselves. There must be a surrogate for the slaughter. Those who will not battle within their hearts will seek a victim for their impotent rage. May they be buried by grains of hail, that nothing will grow from their malice and I will cast a shadow upon them from the north that will bind their vulgar tongues and feed the monster within them, who they will not fight, and who in time will make their existence an inescapable hell. And I will curse them to wander forever among the lost stones of their own fear and stupidity and self hatred. Woe unto them who run from their demons, for they will bring ruin upon ruin to the world. The creature will be fed, one way or another. One war or another. One sacrifice or another.

In the earth-realm all is crossed;

Weird’s will changeth the world.

Wealth is lent us, friends are lent us,

Man is lent, kin is lent;

All this earth’s frame shall stand empty.

Dive down and waken the dead! Find the demon that time immemorial has twisted and generations of denial and repression has cursed. There lies your foe. Unearth the tombs, shatter the bands of iron that seal them. And the spirits, faced and bested, will fight for us, will trace the edge of the rusted blade until it shines like a beacon through the ages. And the sword held on high will burst into flames and radiate its light into the heart of the star that beats dimly within our blood. And a flame will rise in the north, where I stand upon my hill. And I will not weep for the end of a world. And I will plant the tip of my spear in the dark earth. And I will raise the sword to the moon!

*Excerpts of “The Wanderer” as translated by Michael J. Alexander

Become a supporter of Gods&Radicals here.