An article that explores the culture of fear as a tool for establishing the Power of a capitalist, neocolonial, and genocidal governmental system.

“Just as the Indian was branded a savage beast to justify his exploitation, so those who have sought social guerrillas, or terrorists, or drug dealers, or whatever the current term of art may be.” (Piero Gleijeses, as cited by Noam Chomsky)

The culture of fear has been part of Brazilian life for many years, most recently exemplified by the dictatorial military regime of the 1960-80s. To generate this fear in the population, the State used terrorist tactics to impose its control, such as censorship, murder, physical and psychological torture. State terrorism is vastly recorded as a phenomenon of governments that have formed from revolutionary factions. What is recorded is only a fraction of reality, and the little recorded is an interpretation of a small fraction of the population: a white elite.

Chomsky is an example of a white intellectual elite who succeeded in elevating the theories of Latin Americans on the topic of “genocidal and dictatorial democracy” (1996). In the same way Sartre helped elevate Fanon’s work, so we can not ignore our reliance on white people to inscribe Other thinkers in history. With or without recognition and records, State terrorism still exists today, and it’s not motivated by revolutionary interests, but instead by the reactionary interests of the elites and the preservation of the status quo.

The CIA’s supposedly secret 1969 document, The Situation in Brazil, describes the continuity of US political manipulation and praises the economic development brought about by the military dictatorship. All the men concurring describe the preliminary symptoms of the insurgency as “sporadic urban terrorism” executed by “disorganized” and “weak” “revolutionary fanatics”. At the same time, the opposition being “demoralized” through “censorship” and “oppression” is only considered an effective strategy to prevent the rise of a symbol of resistance.

Today in the United States, the categorization of ‘terrorism’ is somewhat recognized as inconsistent and racist: Arabs “are,” and white people are not. Nevertheless, being black and angry has been criminalized by so-called “Black Identity Extremists” being labeled terrorists. It’s necessary to recognize terrorist acts of the State in order to avoid racist inconsistencies such as ‘black people’ and ‘Arabs’ ‘terrorize,’ while the government and the police don’t (a clear example of institutionalized racism). To dissect this racist double standard we can look at the media as an instrument of cultural manipulation, and at what the motivation behind this manipulation is.

When the media reports, it also records history and influences opinions. There is an excess of sensationalist reports of crimes committed by poor black people, which generates widespread anxiety. The streets of Salvador are soaked with fear and remain empty at night, a desolation which in turn leads to more danger, and this way a vicious cycle is sustained.

“Today in Salvador from 8:00 p.m. it’s rare to find people strolling around in most of the neighborhoods.” (Report of a local from Salvador)

The motivation behind sensationalism is not only grabbing and expanding an audience, it is also feeding the culture of fear. This culture of fear creates a pretext for military police violence, for the racist devaluation of black lives, and consequently for the genocide of black people in poor communities. The “excess contingent” that does not benefit the capitalist system can be exterminated under the pretext of protecting the supposedly peaceful and non-criminal bourgeois white life.

The unstated and unrecorded reports are the ones from those who are devalued for not benefiting the system. The culture of fear itself has great pro-system power, it institutionalizes social control, street dynamics, product sales, and urban development. Most parts of Salvador seem to have been built for cars since many people are afraid to walk the streets. Shopping Malls, fashion, security, and segregation are profitable industries that rely on fear, they were created to benefit the bourgeoisie, and they symbolize the rebranding of apartheid.

Why do white people hide in fear and fail to rupture with this system, while others are mass murdered? White innocence is not really naive, it’s deliberate. Because in this deliberate innocence we can preserve our advantage while at the same time not be considered a racist. Which is an extremely cruel thing to do, because we destroy with one hand what we build with the other.

It hurts to recognize the violence to which we are accessories, but it hurts more for the foremost recipients of this violence. We have to see the problem clearly in order to begin solving it, and those who seek genocide as a solution to the failure of capitalism will undoubtedly be our enemies.

Considering that the Brazilian government deploys military forces to attack its own people, the so-called Nation this war aims to protect is not only white but also male. Women in particular are afraid to walk alone on the streets after sunset. Women are even afraid to drive their cars alone. They disguise themselves as men with caps, the wealthier women hire male drivers, and many just don’t go out at all. Needing men to protect women from other men is not a solution to patriarchal violence, it’s a perpetuation of it.

Trans women are not even safe at hospitals (TW: transphobic violence), much less on the streets. Even though there has been steady growth of empowering media representation, and a strong protective community, Brazil has had horrific records of transphobic violence.

Whenever a black child is murdered by the military police, they leave mothers and other family members completely devastated and hopeless. Their endless pain is exacerbated by the impunity, and by the continuous presence of the police in their communities and around other black children.

State terrorism affects all women; white, black, trans, rich or poor, though some more than others. I believe that acknowledging the urgency of this problem and coming together to solve it will finally lead to changes in this world. Coming together means listening to the voices of the silenced, not enabling oppression whenever you can with small daily acts of resistance, denouncing the army, opposing borders, and not waiting for ready-made solutions. It’s best to devise your own strategies which are most effective in your own context, because if you want a boss telling you what you need to do then maybe this is the moment to reevaluate what anarchy means to you. In the words of Tina Fey in Bossypants:

PS: Brazil is not the only country being lead by genocidal white men right now, so I hope you don’t finish this article feeling sorry for a ‘developing nation’. We are all connected and we are all responsible

Editor’s note: A previous version of this article was published in Portuguese in the first edition of the Salvador based anarchist magazine Enemy of the Queen. 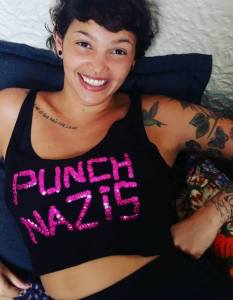 Mirna is our new co-editor, and we rely on reader donations to pay her and our writers. If our work inspires you, could you please consider helping us continue? Thanks, and resist beautifully!

2 thoughts on “State Terrorism: A Genocidal Tool of Social Control”