My son and I garden together—- he is interested in vegetables, I am interested in herbals and wildlife support. First thing every Spring is starting plants from seed. Lot of tomatoes (11 kinds this year); many, many Sunflowers because the squirrels eat them as soon as we plant them. But for me the challenge is planting and re-planting the things that don’t germinate well or that don’t grow well—- I can get Ephedra to come up but I’ve never gotten it to grow over a couple of inches; I can’t get Roseroot to germinate (this year I’m buying plants as well); I keep putting in Foxglove but it hasn’t overwintered yet…..

I’m growing Northern Medicinals and they can be hard. But after you have Oregano all over the place (it spreads, I give it away, it spreads), Thyme in between the stones in the path, Parsley overwintering, and Basil every year in the tomato tubs it’s the next challenge. And there’s a purpose to it; medicinal herbal preparations used to be what we had and they may be that again. I’ve made teas and dried kitchen herbs for years and now I’m feeling ready to try extracts and elixirs. And Magical Preparations from folklore:

This could be viewed as a raised bed with strawberries backed by huge invasive weeds.

Or it might be Mullen behind the strawberries: used by settlers as toilet paper, excellent for smudge, contributing to lung comfort, and the base of ‘Witches Candles’.
So I grow it or, more exactly, keep it in where it pops up. It’s a biennial, like Parsley, meaning that it grows the first year as leaves and the second it makes seeds. Mullen stalks are very tall, flower yellow in progression, and then dry out.

I collect them up and cut the tops into manageable pieces, smacking the little black seeds out of the stalks as I do.

A dedicated thrift-store frying pan to melt the collected candle ends in and coat the outsides of the stalks et voilà! Witch candles as referenced in lore.

I always find this delightful—- I read about something, I look into it, I try it out……. then when it works I feel the broken chain between me and my ancestral past clicking back into being, connecting me to an awareness and skill-set which is now mine (tiny bit by tiny bit) and I can use and then pass on for myself.

The same sequence follows for other things. I read about yesteryear’s children looking forward to drinking ‘Elderflower Cordial’ in the Spring. I prepare (for ‘prepare’ read ‘pick off the bugs’) and soak the flowers, follow the old-timey recipe, and taste history.

The old lore works—- the handsome guy who plays the standing harp puts in a special request for the ‘Auntie Night-Mare’ tea because it really helps him to get to sleep.
I work out how to send someone ‘Two Sleep’ after the Farmer’s Market closes for the season.

After a while I have to explain that Camomile has to be picked and dried as it flowers, scrap by scrap, and that the year’s production of Camomile is finite. Camomile can also teach you that startling difference between ‘edible’ and ‘palatable’— don’t put a flower in your mouth because you can drink the tea.

The nice older couple ask if I’m planning anything new because they’ve already drank all the different selections; we plan out a blend based on their
preferences……

At the end of growing season last year I made Purple Basil vinegar with success and (in a different time frame) found an all-glass, good sized, double boiler in the thrift store. The Horehound came back gang-busters for its second summer (that plant family with the square stems, pretty reliable) and I want to make Horehound cough drops —- it is historical and doesn’t seem like it will be too hard as a start.

Also Arnica and Calendula ointment….. then Boneset and Comfrey (don’t eat those, readers)—- I could paint the ointment on a Mullen leaf, fold it over, and have a ready-made bruise dressing.

Gradually as my Grand-daughter grows up I will become more skilled and I may finally grow Ephedra and Roseroot with success. There’s no end of things to find find out and try and there are many Cunning Wort-Doctors more knowledgeable and proficient than myself to learn from. In their sharing to me and my sharing to my grand-daughter (or another heart-friend) we can recreate the right dialogue between ourselves and Earth, ourselves and our tiny household where we are rooted. 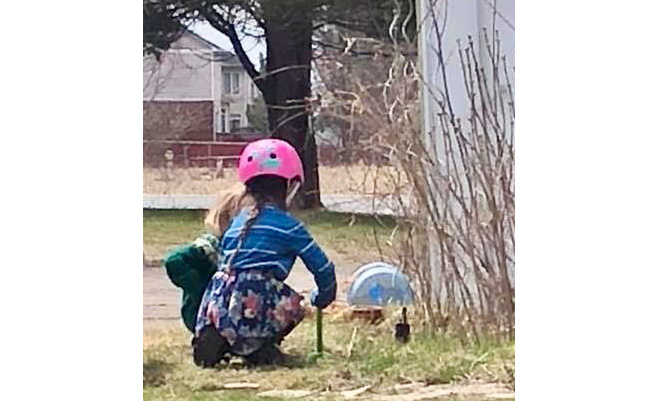 If she’s interested or if there’s someone else who wants the undertaking and if the World doesn’t end by fire or plague she can, since she will know where everything is in the yard and how to make the things, hopefully trade Medicinals for food.