“I offer you a different reason to fight, beyond hope and despair, beyond a hollow victory that only restores Status Q. A reason that can exist regardless of the chances of victory, regardless of the size of that dragon.”

It was an ancient mound. The thief was sure that only he knew where it was, and in the dark, it looked even more defenseless than in the light of day. He could hear what sounded like a moan, as he broke through the outer wall. He broke through, and then he saw it all in his torch light. The gold. Wrought into plates, cups, torques, cuffs, rings, coins, so many coins. Gemstones rough and cut, silver pooled in solid lakes lapping shores of those gold coins. A hoard. And it was all his. But he heard it again. Louder, a rasping exhale, from deeper in the mound. The hairs stood on his skin. And for a moment he started. But he laughed at his own cowardice. Ghosts and spooks were for cowards who didn’t have the courage to seize hoards like this. It is just wind, air allowed to flow for who knows how long.

He reached out and took hold of a golden chalice, and the rasping exhale became an angry groan. A sound rolling like thunder from the depth of the barrow, a feint green light coming from the passage leading down. The hairs stood on his skin again, but now could not be banished by false bravado. He ran, the chalice in his hand forgotten but held fast. He ran, heedless of the laws of fate. He ran, a coward and thief whose avarice must now be put right by others.

Cornwolf had been king for many years. He sat and listened. He sat and listened to the descriptions of the dragon. He sat and listened to the stories of its green poisonous fire. He heard the laments of his people. The villagers, of how their homes have burned. The farmers, their crops burned and the land laid waste with poison. All knew that such a beast was the product of the wrath of the ancient ancestors. The thief was unknown, his whereabouts unknown, what he had stolen also unknown. The only option, aside from restoring what was stolen, was to slay the dragon. For any mortal this was certain failure, and certain death. But Cornwolf was no normal king, no normal man. When the fates branded his lot, they decreed him to be a hero. And hero he was, but the fear of his subjects were many. What would they do without him if he dies? What of the dragon? Should he not send his younger warriors in his place? But Cornwolf would not do this, send others to fight for him, like a coward sitting on a mound of gold? No. “Bring me my armor.” Only a hero could slay a dragon. The words having passed his lips, joy returned to his heart, long forgotten. The joy of living the truth of his soul had returned. Whatever the gods pronounce of his doom this day, he goes to meet it in joy. Even though he may fail and die, he rides out, heedless of the danger. For it is right that he should fight, even though it may well be hopeless. Cornwolf refused to live a life yielding to despair, and letting that despair lead him to wrongdoing and cowardice.

He died, killing the dragon. His people were indeed left to fend for themselves, but their worries, had they lived his example, would have been unnecessary. However, Cornwolf’s people were conquered in his absence. Instead of living a truth that he showed them, they mourned the loss of his person.

I often feel it now. I see the world to come, and the despair laps at the edges of my consciousness. The apathy, threatening to sap every activity of vitality and meaning. This is the danger inherent in Capitalist thought, meaning, and ideas. That if it can’t go on perpetually, that it doesn’t mean anything. That it has no purpose. It betrays how deep seated, in me at least, of how far the Capitalist indoctrination goes. Buddhism helps, as long as we’re talking the real deal, and not the “Boomer Buddhism” that Mark Chapman goes on about at length. But the ultimate truths of Sunyata can be difficult to integrate living in this world, in the day to day flow. I find a much more immediate antidote in the inspiration of our ancestors. In the heroes who understood what was required, what was needed of them. Above is a part of the final act of Beowulf. The old wizened king, rides out to slay a dragon. Modern interpreters point to this and say it is a cautionary tale, of a king casting aside his cares for his responsibility to his people, and tries to recapture his youth. Because of course they would; hollow scholars dreaming of recapturing their youth with some adventure, projecting that internal reality onto the material.

So I offer you instead another interpretation. Maybe this too is a projection. I leave it to you to decide if that matters. My interpretation of this portion of the tale is a hero, knowing the truth of his life, stepping up to do what is necessary. He gladly goes to give his life, knowing that for it to be any other way would be a lie, and bring nothing but personal misery, and misery for his people. The world burns, blasted by metaphorical poison fire, our due for the theft of riches from the Earth, from the burial mounds of long dead things, our ancestors. Indeed, our doom is pronounced, why fight it? Our rulers know what is going on. As they pronounce the devastation as a hoax, they build infrastructure to face the world to come. From the sea walls around Trumps golf resorts, to doubling down on coal, to hoarding resources, selling weapons, and building walls to keep refugees out; make no mistake, if that wall happens, it will be to fight off throngs of displaced people, hungry and violent like the ancient sea peoples, themselves displaced by disaster. Why fight climate change, environmental disaster, and the ultimate venusing of our planet? It is a hopeless fight, our doom, as I said, already pronounced.

It is a mystery to anyone who hasn’t touched mystery. It is a puzzle for those who live in a puzzle. Why do the Aesir and Vanir fight at Ragnarok? Why do the einherjar and the Ljosalfar fight? They know they will lose. And yet, when the blessed Queen of the Dead, in her guise as Hel comes to claim her due, they fight all the same. When the lies, broken oaths, and betrayals of Odin can no longer save the gods and delay Ragnarok, why does he still fight? Why do they all fight? The answer is simple for anyone to see, yet so hard to see in our modern times.

The environment can’t fight for itself. It is trying, the hurricanes in the years to come may destroy much carbon generating infrastructure, but this dragon is no mortal thing. It is the karma of Capitalism. The cause of our effect. Is it not heroism to defend the defenseless? Is it not heroism to fight for what is right, despite the outcome being known to end in failure? To use your gifts to help defend those who held you up when you were defenseless, who fed you when you hungered, and watered your thirst, who taught you and loved you. To not defend them is worse than cowardice. It is villainy. Capitalists are the worst sorts of villain. Their community holds them up, only to have them take a big ol’ shit on that community. “Why should I have to pay taxes, I only use the roads, public services, public resources, etc etc.” They paint themselves as heroes, but have nothing to offer that cannot be provided by a thief in a barrow. And you see them now, they don’t even think they need to lie effectively now. Show them real courage and they melt. They are heartless and soulless. They are dead already.

I offer you a different reason to fight, beyond hope and despair, beyond a hollow victory that only restores Status Q. A reason that can exist regardless of the chances of victory, regardless of the size of that dragon. That reason is: because it is the right thing to do. It is the right thing to do even though you will likely, at a 99.9999% chance, fail. It is the right thing to do, even though you might die. You were going to die anyway, the coward gains nothing in his cowardice, but loses his chance to die a hero. I’m not saying you have to run out and die today. I’m not saying you should be reckless, or ready to throw your life away. I’m not saying your life is cheap, to be traded for a small victory. But as things “heat up”, I think you will all find your moments, where you must face death and choose your path. You won’t know your heart until truly until you meet that moment. If you understand your obligations, you who are noble of spirit, then you will know what to do, and why you are doing it. And your courage and strength will not have its foundation in hope or despair. It will have its foundation in the truth of your soul, in doing what is right, of living the life of a hero. Be more like Cornwolf. 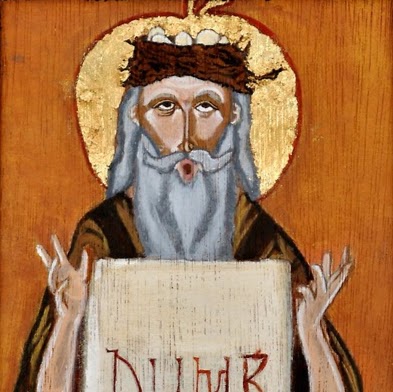 A Discordian for 20 years, Patacelsus finally got comfortable when the 21st century “started getting weird.” When not casting sigils, taking part in Tibetan Buddhist rituals, or studying the unfortunate but sometimes amusing stories of the dead, he’s been known to wander the hidden ways of the city, communing with all of the hidden spirits one can find in a city. As Patacelsus sees it, we’re all already free; after completing the arduous task of waking up to that we can then proceed, like a doctor treating a patient, to try to rouse others from the bitter and frightening nightmares of Archism. He laughs at Samsara’s shadow-play in lovely California, in the company of his wife, two cats, and two birds.

2 thoughts on “Wherefore the Despair?”