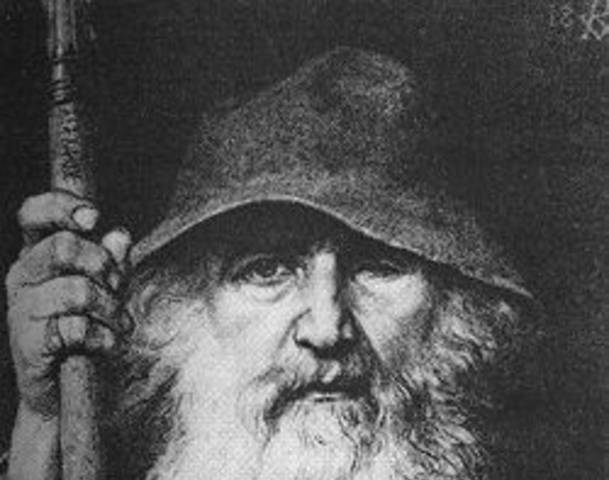 “The Spirit of the Depths had shown me how to awaken the dead,

How to bring forth the lost memories of the dream world,

How to touch the primordial power

That I thought I had banished from the world,

When I filled the womb of the gods with blood.

For the well beneath the tree is the well of dreams.”

“The wheel of time cannot be turned back. Things can, however, be destroyed and renewed. This is extremely dangerous, but the signs of our times are dangerous too. If there was ever a truly apocalyptic era, it is ours. God has put the means for a universal holocaust into the hands of men.”

“The shadow is nonsense. It lacks force and has no continued existence through itself. But nonsense is the inseparable and undying brother of the supreme meaning.”

I am a man of extraordinary violence.

I am the one who roars in the heart of battle.

I am the At-Rider, who drives down my foe.

I am the Evil Worker, the Man of the Spear.

I am the one of Gaping Frenzy.

I drive men to madness.

I am the Master of Slaughter.

I am the One Who is Merry in War.

I am the Hanging God.

I am the bringer of Runes.

I am the War Father.

I slew my father,

He Who Existed Before Time,

Substance and spirit of the cosmos.

He was beyond good and evil,

Though he was grim and terrible.

How he howled in the abyss of night.

What memories drifted and floated through his mind?

In a somnolent universe, what did he dream?

Will, Thought, and Spirit arose in fierce arms.

With my brothers I sundered him and split him.

And his blood drowned the world,

It spilled over from the Yawning Gap,

It drenched the stars.

And a shining fragment of ice,

The heart of ice,

The pattern of all things,

The bridge between the seen and unseen,

Burned through the fabric of the world.

And the ice poured into the Realm of Mist,

And there his kin grew strong and proud.

And upon those frozen plateaus

A lost kernel was buried in ice

And its power dripped between the worlds

And formed a well beneath the Tree.

For god is in the egg.

I have Nine Twigs,

I see beyond the nine worlds,

And into the endless cycles of time.

I have seen the devastation that will come,

I have seen the vision of the Wolf that will come for me.

The Wolf is always there in the darkened forests of my mind.

I know that he is my ruin and doom.

I know that he will bring blood and fire upon the world.

And I know that I will see the world born again in water.

The Gods are not immune to fate.

I am the Son and the Father,

I am the Cold Sky,

I am the Wanderer and Deceiver.

Those who wander do not remember.

I seek my shadow.

He is the damp and the moist,

The One beneath the dirt,

He is the sacrifice and I am the blade.

In the hollow beneath the tree,

For he sits by the pool

That is fed from waters that flow

From that savage realm.

The world lives through forgetting.

But he who dwells among the mosses and dripping roots,

He alone carries the memories of what I destroyed.

Lost in an infinity of dreams.

And I went down to him,

From my golden palaces and joyful battles.

I went down beneath the tree.

And I found him there lost in his endless wisdom.

To repair the gaping wound,

To atone for rending the world.

As I had climbed the tree,

As I had hung myself from the branch,

As I had pierced myself with spear,

As I had gone up

To gain the power of the Runes,

To gain the power to bind,

The fire of the sea and the path of the snake,

The horror of the clouds,

The ruin of the harvest,

The Home of Mortification,

The grain that brings famine,

The Grief of the humanity,

The rivers of ice,

And the destroying Sun,

The One Handed God of Temples,

The adornment of ships,

The iron that bends.

As I went up for these things,

So I knew I must go down to complete myself.

For chaos must join order.

My ancient uncle made me look into the murky waters of the well.

And in the well,

I saw a consciousness unreasonable,

I saw a force unstoppable.

And I knew that I was blind,

I could not see myself,

Could not see the way.

I knew what I had rejected,

The spirit of the womb.

Among the clouds and winds, the lord of the sky,

I had lost the earth,

The body of my father, who was also my mother,

In the landscape I had carved in his bones,

This truth was written.

The truth was etched into the mountains,

But I could not read it,

For I could only read the runes,

The language of artifice and doom.

I could not longer read the words of the world below.

And therein dwelt my weakness.

I had made myself strong

Only with the power of heaven.

I knew that I was spirit without body,

And the spirit is nothing on its own,

But my destiny is to walk both paths,

To walk in two worlds,

To walk in all the worlds at once.

And so I begged my uncle to drink from his well.

And I learned the Nine Songs,

And what my uncle requested,

And I took my hand and raised it to my face,

And my fingers dug into my skull,

And I ripped my eye from my face,

And the world became all blood,

And the tree shuddered above me,

And the gods wept,

And tears of blood dripped into my beard.

My grim uncle took the quivering eye in his hand

And he cast it deep into the well.

And I fell upon my knees

And I plunged my fingers into the rich, wet dirt

As the cosmos became one

Within my shattered mind.

And I saw stars exploding,

I saw the dragon stirring.

I saw everything that had ever been and would be.

I felt fate burning me.

I saw that all my knowledge,

Was nothing more than an attempt

To impose something knowable

Onto a universe that defied me.

Or had defied me.

That all my wandering had led me back to myself,

Back to this madness.

How far must a star travel through space

Before it finds the part of itself

That it once thought lost?

As my soul came together,

The knowledge that transcends knowledge.

The meaning that surpasses meaning.

That which can only be achieved through

The Spirit of the Depths had arisen within me.

I could not teach it,

It was mine to bear alone.

The Spirit of the Depths had shown me how to awaken the dead,

How to bring forth the lost memories of the dream world,

How to touch the primordial power

That I thought I had banished from the world,

When I filled the womb of the gods with blood.

For the well beneath the tree is the well of dreams.

And in my dreams was the only path of truth.

And a thousand voices spoke to me,

And I heard the destiny of time,

That will outlast the longest night.

And my Sun became darkened

And my Moon rose on the horizon of my consciousness.

And as I had once lost everything

Upon that gallows tree,

So I lost everything again,

Beside the well of dreams.

For I am the God that is to come,

I am the God that is becoming.

And my uncle smiled gently,

For he knew as well as I,

That his destiny was to die for me,

Though his kin would survive the great destruction of the world.

And he showed me the horn from which he drank,

The horn that signaled the end of things,

The end of my power,

The time when the wolf within me

Would step out of the shadows and engulf me utterly.

And my uncle touched my arm,

For long before the time of the wolf

He would be cut down

And his head severed from his body

And I would use my charms and herbs

Upon it and keep it with me always.

The world of dreams will swallow up this rotten thing.

Our lives and struggles

Occur as so much flotsam

Upon a sea of unfathomable depth.

We float, dreamless, through a galaxy of powers.

Countless pasts and futures, overlaid upon each other.

The world we walk through is part ruin and part verdant growth.

Cycles, which, though we may long to escape, shall never end.

The world drives itself to its doom, unrelenting.

I have given up separating dreams from wakefulness.

I have abandoned the task of assigning truth to one,

And illusion to the other.

Give me deep and muddy waters.