This is the second part in a series devoted to the ancestors of revolution.  The first part of this installment on Karl Marx is here.

When many think of economics, they might mostly think of the stark social-science full of numbers and quantities, figures and charts describing how much a product is worth, how much it costs to make something, how many workers are required to run a business, or how much profit can be derived from something.

That’s certainly what economics looks like now, less a social science and more a statistical description of esoteric processes in which we find ourselves mere abstracted numbers.   But that’s hardly Marx’s economics.

As mentioned in my last essay, Marx noticed that none of the resistance movements to capitalism quite seemed to understand how the system worked.  Already, people were making charts and graphs, crunching numbers to maximise profit and minimise cost–in fact, factory owners pioneered most of what we now think of as ‘economics.’  But what precisely capitalism was, what it meant, and what it did to human society? None really understood this.

Capitalism created multiple levels of complication to activities which were, pre-capitalist, quite simple.  You grew food, used what you needed, and sold the excess.  Or you made clothes, or beer, or tools and sold them in the markets, deriving profit directly from your work.  But in capitalism, you didn’t sell your excess at all–you sold your labour.  And this affects a lot more than just the individual’s means of survival.

The Worker and the Egregor

When you make dinner for friends, you probably don’t think much about the concept of labor.  Certainly, making dinner is work; it takes a lot of effort to prepare a good meal for several people, particularly if you’re doing most–or all–of it from scratch.  Rinsing and chopping ingredients, mixing them together to the right balance, spicing, applying heat, serving, cleaning up afterwards: this requires effort, time, skill, work.  But you don’t usually consider the act of making a meal for your friends or family labor, even though you’re doing all that for others.

But if you’re doing all the same things in a restaurant, for pay, all those activities seem to transform into an entirely different category of experience that we usually call work or labour.  Cooking for pay changes the conditions of the effort in several ways, not least of which that it tends to become a little less fun.  It changes the very meaning of the food you cook; it’s not yours to give any longer, nor is the meal (except in very intimate, small restaurants) you’ve made identified with you any longer.  You’ve become alienated from it, and it has become a product.

Marx called this Estranged Labor, and it has some profound implications for the way we see not just what we do for work, but how we see ourselves.

The alienation of the worker in his product means not only that his labor becomes an object, an external existence, but that it exists outside him, independently, as something alien to him, and that it becomes a power on its own confronting him. It means that the life which he has conferred on the object confronts him as something hostile and alien.

The meaning that we derive from a meal made by a friend and one purchased at a restaurant is fundamentally different.  When a lover cooks you dinner, the food itself seems to contain their care for you–in fact, in an Animist view of the world, it does.  But when it’s been purchased, the meaning has transferred from the cook who made it to the restaurant itself which becomes, in occult terms, egregoric.  In the case of fast-food, the meal’s meaning contains nothing of the unnamed, faceless low-wage worker who made it but everything of the branding of that establishment.

This alienation from the person who cooked the food is actually quite uncomfortable for us, but marketers do plenty to make it more palatable.  Consider: a “Happy Meal” from McDonalds is happy only insofar as you’re told it is.  The poor person of color who cooked it for you may have been quite sad, actually, and it’s a bit sad when a child is fed low-quality food in the backseat of a car on their way home from child-care because their parents are too busy to cook for them because of capitalism.

Marx noticed that workers no longer experienced the work they performed as part of themselves, but rather an abstracted or objectified force.  Part of this was because people no longer derived profit from their work–you no longer made things for your own profit, you sold your time/labor to someone else who then profited from what you made.

The implications for Pagan thought should be quite obvious here.  Disenchantment is alienation from the magical world, yes, but it is also alienation from the places magic occurs, both the natural world and human interactions.  And more so, Capitalism has caused an alienation from our own bodies.  Says Silvia Federici, author of Caliban & The Witch:

“Capitalism was born from the separation of people from the land, and its first task was to make work independent of the seasons and to lengthen the workday beyond the limits of our endurance.  …what we have not always seen is what the separation from the land and nature has meant for our body, which has been pauperized and stripped of the powers that pre-capitalist populations attributed to it.”

“In Praise of the Dancing Body” (A Beautiful Resistance–Everything We Already Are, page 84)

So, a materialist, anti-capitalist understanding of the world shows us what many Pagans already suspect: our alienation from our own bodies and the natural world is the source of our disenchantment.  And for Marx and those who recognise him, that alienation is caused by capitalism.

“Primitive” Accumulation and the Sorcery of Capital

Ever wonder why slaves were brought to North America to work the cotton fields? Your immediate answer is probably an understandable one: people are evil, greedy, and really awful.  But people are also good, generous, and really wonderful–discussions about ‘human nature’ never get us anywhere, as everything that a human does, from a Pagan perspective, is part of their nature and Nature itself.

The basic reason’s pretty obvious, though–slaves performed labour for their masters and were politically powerless to demand wages in return.  Their powerlessness came from the violence of their masters and the governments who supported slavery, as well as the social conditions which made it ‘okay’ for people to own other people.

Marx called slavery and other forms of violent ‘wealth-creation’ (such as colonialism) “Primitive Accumulation.”  Primitive in this case does not mean what it means now, doesn’t mean savage or stupid or backwards.  Rather, it means “original” or “first,” as in primary.  Primitive Accumulation, then, was the process by which the powerful accumulated wealth, and this was always by force. 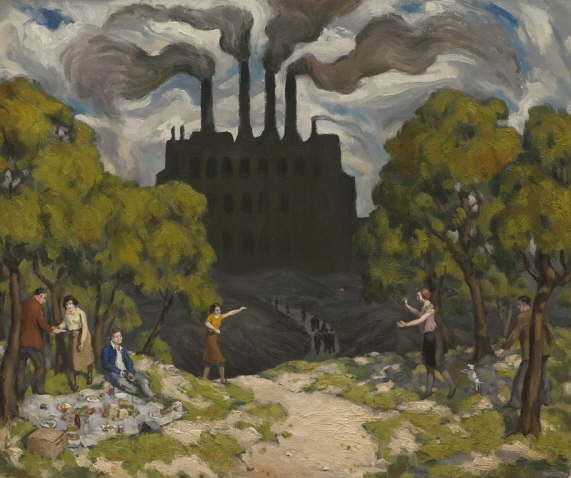 Force is hard to maintain, though.  Slaves run away or kill their masters, colonies revolt against the colonists, and ultimately people forced to work don’t actually produce as much wealth as those who aren’t in chains or have guns pointed at their heads.

The wealth that was gathered during slavery and colonization (and a little further back–the Crusades) was certainly nice for those who had it; by themselves, however, piles of gold don’t produce more gold.  Also, there’s only so many lands to plunder before all the wealth that can be gotten from them is exhausted, and slaves can only be worked so hard until they die.

Marx noticed, though, that the rich who used their (ill-gotten) wealth to make more money gained more economic power.  Their wealth became Capital once it was invested to create factories, from which they earned more profits.

Marx saw not only that workers became alienated from their own work, but that Capital was the distillation or crystalisation of their labor, now in the hands of the rich.  The wealth derived from slavery was dead labor (truly–many, many slaves died in order to create that wealth), and that dead labor-as-wealth sucked more labour from workers who had (because of the destruction of the Commons) no other choice but to work for the Capitalists.

Capitalism became a more efficient–and more profitable–method of becoming wealthy than slavery or colonial plunder, though the powerful often resorted to violent methods first in order to get Capital to start with.  It’s not much different from robbing people and then using their stolen money to start a business.

In his writings, Marx uses quite a bit of esoteric, almost occult, language to describe the workings of Capital.  For a purely secular reader, his use of alchemical terms may seem mere metaphor, but for a Pagan or witch, one starts to see his true brilliance.

Capitalism seems to be a system not just of economics and political control, but also a system of magic.  Creating an egregoric (and alienated) conception of work, converting other peoples’ energy into Capital that can then convert other people’s energy ad infinitum.  It becomes almost Alchemical, as if Capital is the philosopher’s stone, changing the lead of dead-labor into gold.

We can see more of this magical understanding in The Communist Manifesto, where Marx & Engles speak to the social destruction caused by the capitalist class, the Bourgeoisie:

Constant revolutionising of production, uninterrupted disturbance of all social conditions, everlasting uncertainty and agitation distinguish the bourgeois epoch from all earlier ones. All fixed, fast-frozen relations, with their train of ancient and venerable prejudices and opinions, are swept away, all new-formed ones become antiquated before they can ossify. All that is solid melts into air, all that is holy is profaned, and man is at last compelled to face with sober senses his real conditions of life, and his relations with his kind.

Capital becomes a magical engine transforming everything it touches.  It destroys social relations, it consumes natural resources, and it extracts our very work-essence (that is, the power of Manifestation) from the human body, leaving only death.  It is no wonder that all the environmental damage which now haunts our earth occurred since Capitalism, not before.

The question for us, the question Marx seems to ask, is what will we do about it?

Implementations of Marx’s ideas during the Russian revolution against the tyrannical and murderous aristocracy by men such as Lenin and Stalin caused even worse problems.  Both believed that Russia should industrialise first, go through a controlled-capitalist period before becoming Communist, and the result was something that looked precisely like Capitalism does, but with more direct violence rather than the hidden violence we face daily.  China, though Communist in name, is more accurately described as a State-Capitalist economy, and now produces most of the goods used to fuel the Western Capitalist world.

I’d argue Marx is not to blame for this.  But we also cannot take Marx by himself.  Subsequent Marxist thinkers, particularly Black and post-colonial theorists, have expanded heavily on his ideas.  Also, Marx needs a touch of the Paganism he inadvertently influenced.  Like any ancestor, his life and ideas haunt the present in ways he could never foresee, and it’s up to those who live to manifest the world he glimpsed.